Bigg Boss 15 contestants Ieshaan Sehgaal and Miesha Iyer, who confessed love for each other inside the controversial house, have decided to spilt within a year of dating. Recently, both of them have unfollowed each other on social media.

On Friday, the actor announced his break up on social media and wrote, “Hello Ieshaanians, I would like to take out time and tell everyone about an important announcement about my relationship. As it has been all in front of you and that you guys have been expecting a lot from me and the other person as well. It’s better to clear that we are not together anymore. I obviously had plans to have a long-term one but sometimes life doesn’t really have the same plans as you do. I would wish you guys to continue and shower the same amount of love to me individually as well. And that you keep supporting and loving me. Hope to always make you’ll proud. Lots of love – Ieshaan.” 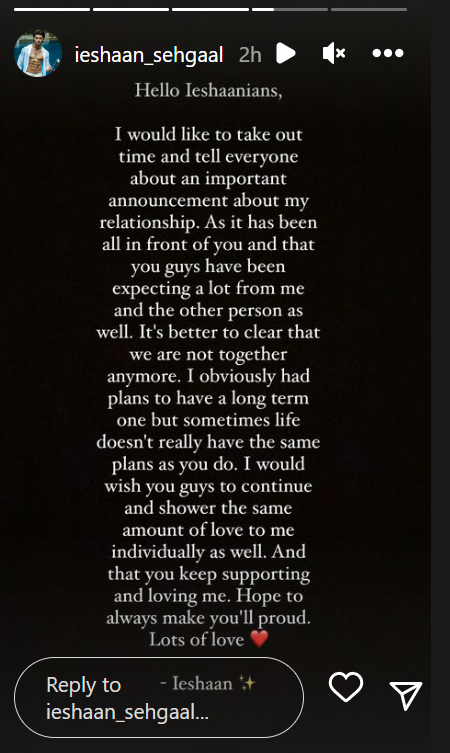 Ieshaan talked about his breakup while speaking to the Hindustan Times. He confirmed and said, “Yes it’s true, we have broken up. It’s been quite some time.” He added, “things were not working out. I think we were not meant to be (together). It wasn’t something which would have worked out honestly.”

Ieshaan said, “She wanted different things from life and so did I. The circumstances of the show were very different. I was very much invested in the relationship. When we came out and entered the real world, it was very much different from what we were facing inside the house. I think it is good that we broke up.”

He also said the he is not “someone who will hold a grudge. I’m not in touch with her. If you are asking if I’m on talking terms with her or I’d like to talk to her, then no.” While talking about the breakup, he said, “It’s not normal to deal with a breakup, especially if you have invested so much in a relationship. It always gets difficult. (But) I’ve completely moved on. I’m in a happy and positive space.”