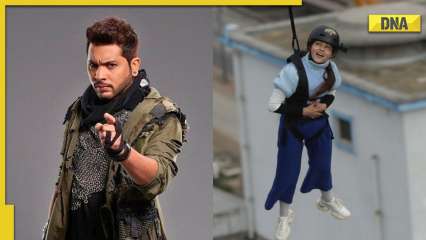 Khatron Ke Khiladi 12: Rohit Shetty-hosted show is just a week away from its finale, and Rubina Dilaik continued to outperform other contenders. Among other contestants like Kanika Mann, Nishant Bhat, Mohit Malik, and Rajiv Adatia, Rubina performed the stunt better than them. Owing to her back-to-back performance, Rubina became the top performer of the week.

Here are the reactions to Nishant’s journey

@TheNishantBhat u are already a winner

U were not eliminated on stunt basis….ur journey was so inspiring and u nailed every stunt

He is for sure better than Kanika and Rajiv. He deserved a place in the top 5. #NishantBhat
— Aao Teen Paanch Karein (@teen_paanch) September 18, 2022

Rohit Shetty lost his cool on Kanika Maan and Nishant Bhat over their poor performance in the show. In the last leg of the season, Rohit went on to say that in his seven seasons, he had never been as disappointed as he got with Maan and Bhat.

Rubina, Kanika, and Nishant took a part in a stunt where they had to remove keys while from an open metal cage, hung in mid-air. Another interesting twist to the task was that the keys were attached to metal chains, and a current was passing through the chains. So, the contestants will have to suffer a little shock to get the keys. Rubina performed the task better than expected, and become the top performer. Nishant and Kanika were not been able to perform, due to the fear of getting electrocuted. Both contestants performed poorly, and they aborted the task.

Rohit got miffed with poor performance, and he sensed that both players showed little-to-no courage in performing the task. While speaking to Kanika, he stated that “you don’t deserve to be in the finale race, and neither you deserve the trophy.” Shetty further added that Shivangi Joshi is better than her, and she deserved to be in her place. Rohit had similar feelings for Nishant, and he expressed his anger, and disappointment openly.