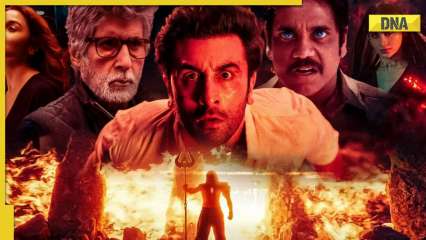 Brahmastra box office prediction day 9: Ranbir Kapoor, Alia Bhatt starrer Brahmastra Part One: Shiva showed a great jump on the 2nd Saturday, and as per the trade expert the film is likely to earn Rs 14.50-15.50 crores on day 9. Trade expert Sumit Kadel stated the early estimate of day 9 on his Twitter, and he confirmed that Ayan Mukerji’s film has crossed the lifetime collections of Kartik Aaryan’s Bhool Bhulaiyaa 2.

Sumit also posted about the 2nd Friday collection and stated that the film earned 9.50 crores from all languages. As per his tweet, the collection from India stands at Rs 182 crores.

Veteran Telugu star Nagarjuna Akkineni wins masses across the nation with his brief-yet-effective cameo as the Artist Anish Shetty in Ranbir Kapoor-Alia Bhatt starrer Brahmastra Part One: Shiva. In the fantasy adventure, Nagarjuna possesses the power of Nandiastra, and his performance was applauded by the masses.

Nagarjuna opened up on the success of the film, and the appreciation he got from his cameo. While speaking to ETimes, the actor said, “The feedback has been fantastic. The reactions I have received to my character have been very powerful. Everyone’s saying ‘What an impact my character has created at the midpoint. Most fans said they were blown away with the Nandi segment and the chase on the road. A lot of people loved my character’s dialogues, especially the ones infused with Lord Nandi’s mantras.”

The actor further stated that more than anything, what surprised him was that so many people sent out videos to him from Brahmastra screenings that happened in the North. It was nice for him to see those reactions from the Hindi audiences, considering it’s not his main lead, and yet he got such reactions. Brahamstra will be followed by Part Two: Dev.