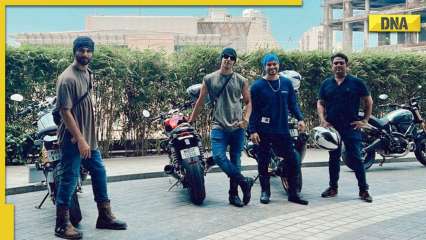 Ishaan Khatter uploaded a number of pictures on his Instagram account on Saturday. Ishaan, his older brother Shahid Kapoor, and their close buddy Kunal Kemmu were all seen in the photos. Shahid also posted his monochrome photo to Instagram.

Shahid, Kunal, and Ishaan are smiling in the picture as they stand with their motorcycles, and in the following picture, their initials are visible on their coffee cups.

Recently, Shahid opened up about the film’s box office failure on Koffee With Karan and said, “Actually in December, when we were supposed to release it on the 31st and we couldn’t release, because COVID came in and Delhi got shut down. It literally happened 3 days before. All our marketing material was out and everything had been released and very clearly in my head in December, I asked myself,  “Am I thinking from my head or from my heart?”

He continued, “Because it was a film that was very close to our hearts and I was very emotionally involved in the character and the father-son dynamic had affected me personally as well. And my director and producer, Aman and Gautam, both of them were very keen that the film goes to the big screen.”

The Jab We Met actor even said that he wished that he had ‘protected’ the film since he added, “When in December it didn’t happen, I was really thinking that should we just straight go to digital now. Kyunki film ko garam karna baar baar bada mushkil hota hai, specailly jab aapka saara material out hai (Because its really difficult to repeatedly keep creating the hype around the film, especially when all your material is out)”.

“And then, unfortunately, we released in April, which was not a great month for us because there was a certain mood and a certain type of cinema which the audience was watching and we had shifted our date multiple times by the time we released, but you are still optimistic and hopeful thinking that things will get sorted but it didn’t work out like that and I feel maybe we didn’t do the right thing on the film may be the film needed to be protected, because it has got so much love since it released on digital”, the actor concluded.