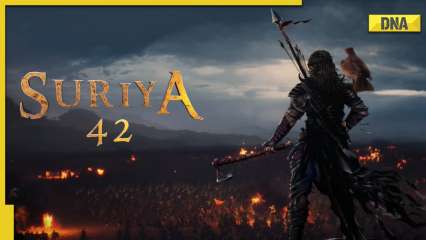 The motion poster for actor-director Suriya’s forthcoming film, which was written and directed by Siva, was unveiled on Friday. A first in the careers of both Suriya and Siva, the heavily special effects loaded poster indicates a big screen period spectacular. The trailer opens with an eagle soaring over a battlefield where we can see warriors riding horses and clashing swords and axes.

“We seek all your good wishes as we begin our adventure!,” Suriya tweeted.

The film’s tentative title is Suriya 42, and it will be produced in 3D and released in up to 10 different languages.

For the unversed, in the category for feature films in all languages, Soorari Pottru won every major National Film Award, including Best Feature Film, Best Actor and Actress (Suriya and Aparna Balamurali), Best Screenplay, and Best Background Score.

Actor and producer Suriya shared his happiness and said, “I am absolutely humbled by the incredible honour that Soorarai Pottru has received. I am falling short of words to express my gratitude and truly applaud the entire team’s effort to bring this inspiring story of Capt. Gopinath and his vision. The film has truly proven that nothing can stop one from achieving their dream.”

Director Sudha Kongara said, “Soorarai Pottru has always held a special place in our hearts. It is the inspired story of a man that sincerely believed in spreading his wings and reaching new heights for the people, and with the jury recognizing our little film for this prestigious award, it is a truly momentous day for the entire team.”

Soorarai Pottru, a film directed by Sudha Kongara and produced by Suriya, Jyotika, and Rajsekar Pandian and starring Suriya and Aparna Balamurali in the key roles, made its digital debut on Amazon Prime Video.