The Batman set to easily three-peat this weekend


PLOT: Young Sammy Fabelman dreams of being a director and is encouraged by his doting mother (Michelle Williams). At the same time, his more aloof father (Paul Dano) wishes he’d pursue something more serious.

REVIEW: The Fabelmans will forever rank as one of director Steven Spielberg’s most personal films. While telling a story about a fictional family, Spielberg has been open about how the film is based on his upbringing with Sammy Fabelman, who he was as a young man. The delicately paced but absorbing film gives us perhaps the most revealing insight into Spielberg’s development as a director than we’ve ever had, with him freely showing us how much his relationship with his parents influenced his work.

The movie starts with young Sammy’s first visit to a movie theater, showing The Greatest Show on Earth with his parents, Mitzi (Michelle Williams) and Burt (Paul Dano). The film’s famous train crash sparks his love of movies, with Sammy, bent on recreating the moment with his expensive model trains, and we see how his mother encouraged his early work. His father, while loving, is a somewhat more aloof figure. One of the early computer geniuses, Bert’s work uproots the family frequently, taking them from New Jersey through an idyllic period in Phoenix and then to a more emotionally fraught move to a very anti-semitic part of California.

Williams and Dano are exceptional here. Mitzi is shown to be a frustrated artist herself, a would-be concert pianist who gave up her craft when she got pregnant. She’s loving but also unstable, prone to manic episodes and eccentric fits of spontaneity. She has a lot of passion but no outlet for it, while his father is more practical and a staggering genius whose work leaves less room for his family.

Williams is already being buzzed about for a potential best actress nomination at the Oscar this year, and indeed it ranks as one of her finest roles. She’s terrific as Mitzi, who balances her responsibilities as a mother and her own needs, including feelings for a family friend, Seth Rogen’s Benny, that she struggles to reconcile. Williams and Rogen previously worked together on Sarah Polley’s underrated Take This Waltz, and their easy chemistry shows us why Mitzi would perhaps yearn for someone like Benny. He’s not a genius like Bert, but he’s kind and funny, and Rogen is extremely likable in the role.

One involves the great Judd Hirsch as a long-estranged uncle. Like Sammy and his mother, he’s a frustrated artist, and he sees through the young man right away, teaching him a powerful lesson as the two sit shiva for a deceased relative. Hirsch seems a surefire Oscar contender for his role, and it’s a brilliant “chef’s kiss” career capper for this 87-year-old actor. The second cameo is that most reviews spoil, but I can’t bring myself to give it away. It involves a beloved cult figure one wouldn’t associate with Spielberg, but it’s a crowd-pleasing moment that will get movie fans talking.

The Fabelmans is a departure for Spielberg in some ways, with him opting for a relaxed, episodic feel that feels unusual given his aesthetic. Some may complain the 150-minute movie is slow, but while deliberately paced, it’s never dull, and the onscreen images are absorbing. John Williams contributes a sparse score, with much of the film scored by Mitzi’s piano playing. Notably, this is also one of Spielberg’s most playful movies, with him delighting in recreating the short films he made with his pals in Phoenix. There are even a handful of moments where Spielberg himself, through his craft, winks at the audience and acknowledges the fact that what we see on screen made him the artist he is today. Indeed, for those of us who consider Spielberg’s films an essential part of our love of cinema (which I’d wager is the case with literally everyone reading this), this is an invaluable look at how one of the greatest artists of our time came to be. 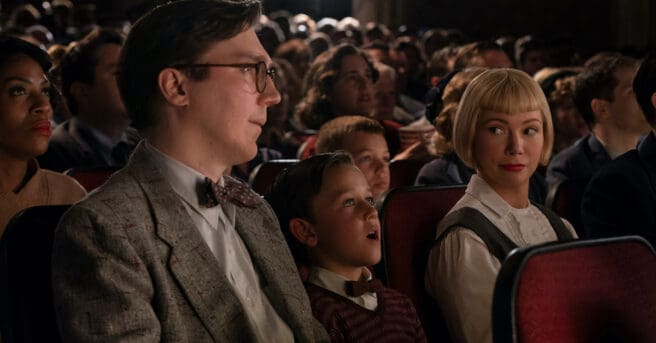